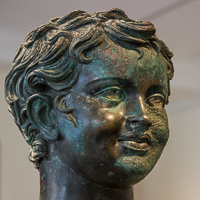 The Greek and Roman galleries at the Met rival the greatest collections of art from the Ancient World anywhere on earth. Works two, three or even six thousand years old are among the oldest in the museum. But age alone does not make these works worthy of study. The empire of Rome has influenced art, architecture, and philosophy in the Western world more directly than any other. And Rome, in turn, drew heavily on the Greeks. This is the foundation upon which Western culture was built--any other gallery you visit with European or American art can be traced back to the Dionysian potter, the marble busts and the bronze tripods in this gallery. An entire day's visit to the Met can be spent in this gallery and still leave you with more to see and more to learn. 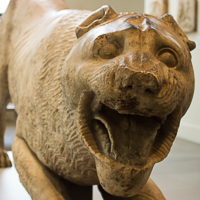 The exhibit traces the history of the two great Mediterranean empires through the art they left behind. Beginning with prehistoric Cycladic artifacts dating back to the fifth millennium BCE, galleries proceed in rough chronological and thematic order through Emporer Constantine's adoption of Christianity in the fourth century. Large, photogenic sculptures dominate the main hallway and central atrium and draw the majority of visitors, but numerous treasures are to be found in the side galleries. Take time to discover the treasury, the recreated rooms from Roman villas, the classical armor scattered throughout and watch the progression of technique and technology as the civilizations rose. Do not miss the Etruscan chariot on the second floor (and the accompanying view down on the stunning atrium.)

The 2007 redesign of the Greek and Roman Art gallery has restored this wing to its intended prominence in the museum. Together with the Egyptian wing, Classical Art was meant to be one of the two great pillars of the Met. No other place in the hemisphere can compete with the Met's classical collection--only a trip to London, Rome or Athens can surpass its breadth and depth. While classical art alone may not draw visitors to the museum, whatever else brings you here is either (in the case of Western Art) a direct descendant of the Greeks and Romans or (in the case of Arabic, Asian or African Art) is best appreciated in contrast to it. This is base against which everything else in the museum can be measured. Whatever your destination in the museum, get there by way of this gallery.