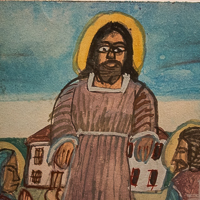 Works from over thirty Ukrainian modern artists are featured in this impactful exhibition. Most of the artwork was recently acquired by the museum and many are on display to the public for the first time. Ukraine’s contribution to the world of Modern Art was significant during the years between the two world wars, but have since often been overlooked. As the rest of the city looks back at the Modern Abstract movement, be sure to include the Ukrainian Museum on your tour.