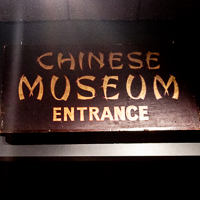 Chinese immigrants have been a part of the American landscape since the days of Spanish colonialism and have played key roles in both urban development and rural westward expansion. But in a city filled with monuments to immigration--Ellis Island, the Lower East Side Tenement Museum, the African Burial Ground--the unique experience of immigrants from China is often overlooked. The Museum of Chinese in America fills that gap, focusing on the lives, contributions, experiences, and accomplishments of Chinese immigrants to America. It is the perfect balance of information and charm and the ideal anchor for exploring Chinatown.

We try our luck with sweat and blood. - Chinese Poem 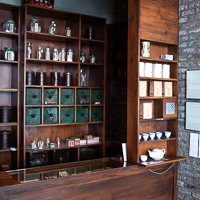 The museum manages to tell a thorough story of the 300-year history of Chinese immigration to the United States in a small, engaging space. The permanent collection features photos, artifacts, stories, and recreations of notable immigrant contributions to American culture, both individual and collective. Starting with early colonial trade, the exhibition highlights the role of Chinese laborers during the 19th-century gold rush, follows establishment of <i>Chinatowns</i> in major American cities together with the associated rise of prejudice and stereotypes, and concludes with a look at the increasing visibility of Chinese communities during and after World War 2. The museum supplements the permanent collection with rotating exhibits in a pair of neighboring galleries offering a detailed examination of some syncretic aspect of Chinese-American culture.

New York City has no lack of museums and galleries that explore Asian art and culture. It also has several places to explore the story of immigration. The MOCA sits alone at the intersection of the two: recounting the cultural impact of Chinese immigration to the United States. The story is not of how the Chinese assimilated to American culture, however. Rather, it is a much more complex tale of a two-way cultural exchange: how being in America impacted immigrants, but more so how three large waves of immigrants who now account for over one percent of the population, left a lasting and ongoing impact on the American landscape. From the gold fields, railroads, and fisheries of the Pacific Northwest to the restaurants, laundries, and shops of every major city, Chinese-born citizens have influenced America as much as it has influenced them.