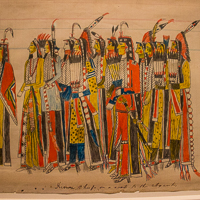 Charles and Valerie Diker spent decades building one of the world's greatest private collections of Native American artwork. The Diker's gift of significant pieces to the Met--already curators of one of the best collections of Indigenous Art--came as no surprise. But the gift included a revolutionary stipulation: the museum is to present them not as tribal art, but as American art. This long-running exhibition is held in the heart of the American Wing, redefining what the Met and the art world considers 'American Art.'

We wanted quality, not quantity, and we wanted the collection to represent the breadth of the country. We wanted it to be a collection you could teach from. - Charles Diker 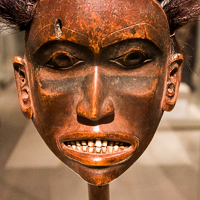 Beyond the symbolism of the location of the exhibition, the collection itself is extraordinary. Spanning almost two millennia, works are drawn from over 50 individual tribes and cultures from North America, highlighting major regional and geographic differences. From the mantle of a shaman of the Tlingit tribe in Alaska to Senecan combs to Apace willow baskets, tribes from across the continent are represented. You will see a lot of intricate beadwork, woven baskets, and intricate carvings on weaponry and tools. Take particular note of the Ledger art produced by Plains Indians during the 19th-century. 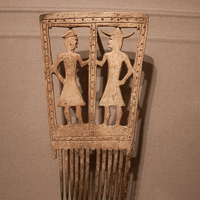 A city whose founding mythology prominently features Native Americans it an appropriate home to the many museums--including the Met--with major collections of Indigenous art. While much of what you will see is similar to objects in the collections of the [National Museum of the American Indian](/museums/national-museum-of-the-american-indian) or the [American Museum of Natural History](/museums/american-museum-of-natural-history), this exhibition begins the process of integrating the indigenous and the colonial, the tribal and the pioneer. Come to see the beautiful works, but also to reconsider the existing American Art in a new context.