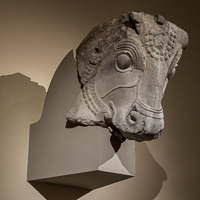 The centuries leading up to the rise of Egypt, Greece, Rome and eventually the great Islamic empires are filled with civilizations largely forgotten but instrumental in the course of history. While their influence echoes through the other galleries, what remains of these civilizations is increasingly rare. The Met’s collection of artifacts from this time and region, while impressive, is on display in one of its smallest departments, occupying just seven rooms. But they are rooms worth exploring in detail and a comprehensive tour through the history of art at the museum logically begins here. Watch mankind progress from basic neolithic tools through the bronze age and into modernity.

You cannot be buried in obscurity: you are exposed upon a grand theater to the view of the world. If your actions are upright and benevolent, be assured they will augment your power and happiness. - Cyrus the Great (600 - 530 BCE) 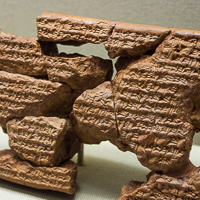 The artifacts in this gallery come from civilizations familiar to readers of the Old Testament: Assyrian, Babylonian, Achaemenid, Hittite, Egyptian, and Sumerian. But artifacts in the collection date back beyond even these ancient empires, with neolithic artifacts from the earliest agricultural settlements in the region. While the arrowheads, bowls and crude stone carvings from these early millennia are impressive for their age, the real draw for this department is the Assyrian Royal Court and related relief sculptures dating back to the ninth century BCE. The giant carvings of winged beasts with human heads flanking the doorway to the court rival the most dramatic pieces of the Egyptian or Greek galleries and provide one of the most impressive vistas in the entire museum. Even a short trip to this department is rewarded. 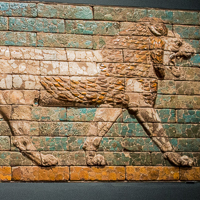 If you plan on visiting any of the other ancient galleries at the Met, whether Egyptian, Greek, and Roman, Islamic or Asian Art, your visit should begin here. The civilizations represented in this small gallery influenced each of the other great civilizations, whether through distant trade or direct lineage. These are lands that would eventually be conquered by Islam These lands are the end of the Silk Road to the Far East. These lands allied with and fought with Ancient Egypt. These lands spread their ideas to the ancestors of the Greeks. Great civilizations existed outside of this region and left behind grand evidence of their existence, whether in the Americas, the Far East or Africa. But none of them impact the modern world the way these ancient cultures do.