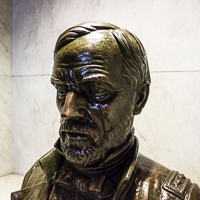 Ulysses S. Grant and the tomb housing his remains are not as popular as they once were. Upon his death, the funeral procession up Broadway stretched for seven miles. More than a million people attended the dedication of his tomb when it was completed in 1897. Today, however, the National Park Services estimates that fewer than 100,000 people visit the massive memorial to the victorious Union general and associated visitor's center. What was once a top stop on the grand tour of New York City has become simply a way station for double-decker tour buses on the Uptown loop.

...a man too broad for prejudice, too humane to despise the humblest, too great to be small at any point. In him the Negro found a protector, the Indian a friend, a vanquished foe a brother, an imperiled nation a savior. - Frederick Douglass 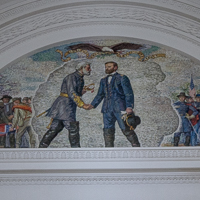 U.S. Grant was a humble man, an accidental soldier, and a reluctant president. The difference between the man and his memorial could not be greater. Grant's tomb is the largest mausoleum in the United States, with an exterior reminiscent of Classical-age Persian kings and the massive monuments they built for themselves. The massive interior spaces have few decorations to distract from the Napoleonic-style sarcophagi containing the remains of General Grant and his wife, Julia. Small alcoves in the monument display Union battle flags and are lined with a unique wallpaper map marking the major battles of the Civil War. The nearby visitor's center is small, with only a few artifacts and a short film. 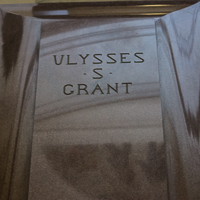 Grant's tomb is not the draw it once was. As General Grant fell out of favor with historians and "Lost Cause" revisionists, so too have visits to his tomb. But Grant's story, from struggling Ohio farmer to General-in-Chief to two-term President is an only-in-America tale. While the tomb and associated visitor's center do not manage to tell his whole story, they are a perfect introduction to this enigma of a man. Whatever your feelings on the man from Ohio, his role in American history is matched only by names like Lincoln and Washington and a visit to his monument is as necessary and inspiring as a visit to theirs.