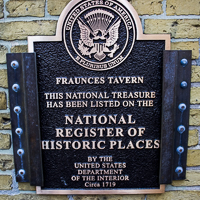 Fraunces Tavern is one of only three existing structures in Manhattan that predate the American Revolution. While this fact alone would make it an historic spot worthy of visiting, history was made at Fraunces Tavern. Before the revolution, the secret society of the Sons of Liberty met here. After the revolution, General George Washington gave his still-stirring Farewell to the Officers upstairs. Despite numerous threats of demoltion over the last 200 years, the rennovated and restored tavern remains as a stirring reminder of New York's part in the revolution. The site still functions as a delicous tavern, with a small museums upstairs filled with artifacts and information.

However combinations or associations of the above description may now and then answer popular ends, they are likely, in the course of time and things, to become potent engines, by which cunning, ambitious, and unprincipled men will be enabled to subvert the power of the people and to usurp for themselves the reins of government, destroying afterwards the very engines which have lifted them to unjust dominion. - George Washington, Farewell to the officers 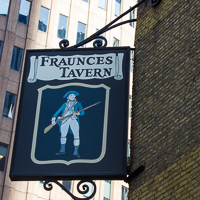 The museum is focused on New York colonial days and the city's experience in the revolution. Artifacts dating to the 18th-century include the sword of George Clinton, early paintings of the founding fathers, maps, litographs, and drawings of the major events of the revolution and George Washington's life. The highlight of the museum is the room where Washington himself bid adieu to his officers a week after the British forces officially left New York City. This is one of the great collections of revolutionary artificats in the city. 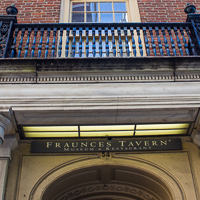 New York City changes itself every decade and many historically significant buildings and sites of major events are routinely redeveloped. Frances Tavern could have been a parking lot, but thoughtful preservationists managed to keep redevelopers at bay and protect what has since become Manhattan's primary link to the American Revolution. Anyone with an interest in the history of New York or of the entire country will be satisfied with a few hours reviewing the collection.