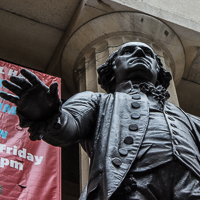 New York has never excelled at preserving its own history, particularly from its colonial and early American days. So much has happened to this tiny island in the past two hundred years that the forts, monuments, battlefields, and historic buildings that would be untouched in another city have long since made way for skyscrapers, subways, tenements, and parks. Any site that has survived hundreds of years of frenetic developments must have serious historical gravitas. The Federal Hall National Memorial, the site of George Washington's first inauguration and the first official Capitol building of the United States, merits such a distinction. While the building that houses the memorial is not actually Federal Hall, the impressive Neoclassical structure is a worthy heir.

And since the preservation of the sacred fire of liberty, and the destiny of the Republican model of Government, are justly considered as deeply, perhaps as finally staked on the experiment entrusted to the hands of the American people. - President George Washington, Inagural Address 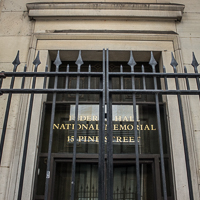 Dwarfed by the surrounding canyons of Wall Street, the stately 1842 building houses a handful of exhibits and significant historical artifacts. Begin outside and explore the architecture of the Customs House (replaced by the even more impressive Alexander Hamilton Custom's House just down the street) which was built on the site of the original Federal Hall. The status of George Washington marks the approximate site of his first inaugural oath and the personal bible he used is usually on display inside. The beautiful interior, free to enter during its somewhat limited hours, showcases a variety of exhibits, including a celebration of Washington's Inauguration and a preview of other National Parks and Monuments around New York Harbor. Join a 30-minute ranger-led tour for a complete experience. 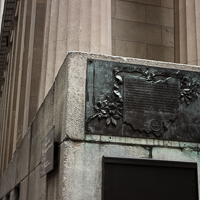 As the nation's largest city, New York was an obvious candidate to be the seat of the fledgling Federal Government of the United States. For five critical years, including during the ratification of the ratification of the Constitution, all of the federal functions which now sprawl across Washington D.C. were housed in Federal Hall. While the building is lost to history, those critical years are worth studying and celebrating. A visit to Federal Hall National Memorial will not take up your day, but it adds perfect variety to an afternoon exploring the dense history, architecture, and culture of Lower Manhattan and pairs perfectly with the many other sites from American History ringing the harbor.