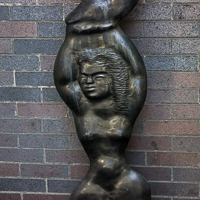 Chaim Gross lived and worked in a quaint historic home near Washington Square Park that has been converted into the headquarters of the Renee and Chaim Gross Foundation. The foundation manages artworks by the artist, who died in 1991 after a productive career that spanned the globe. The foundation opens its doors to visitors for guided tours of the Chaim Gross's home and studio (though hours are limited and advanced reservations are suggested).

A visit to the foundation rewards guests with an hour-long tour of Chaim Gross' studio and home, lovingly preserved and recreated by the foundation. In addition to housing many of Gross' own works, the foundation is also the steward of Chaim Gross' personal collection of art from around the world. Significant pieces are on display, often in locations originally selected by the artist. While many of his works occupy prominent locations in museums around the city and the world, this is the largest concentration of the artist's works in the world and an excellent introduction to his life and work. 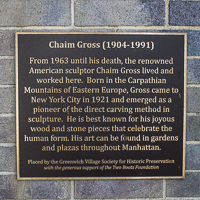 While the limited hours for guided tours make this a difficult gallery to visit on a whim, it is well worth the effort to plan ahead. Chaim Gross lived almost the entirety of the twentieth century, and his career spanned decades, influencing generations of artists and sculptors. Beyond his work, his beautiful, historic 19th-century home is a time capsule of life New York City in the 1980s. If the guided tour times are not particularly convenient, the foundation hosts a range of events and special presentations celebrating the artist and his influence.